There Are No Magic Businesspeople

A blueprint for peak performance and high achievement

For me, one of the unexpected benefits of developing the The Personal MBA Masterclass has been the realization/internalization of the fact that successful businesspeople (and business authors) are normal, everyday people, just like you and me. Their work is mundane, not magical — they have simply identified a need or opportunity, developed their knowledge and skills, and created something of value that satisfies the demand.

It’s easy to deify these figures because they seem so exceptional and (many times) far removed from your current state. Unless you have the opportunity to meet them in person or take a few minutes to write them a letter, they remain enshrined in a place of honor on your bookshelf, encased in a throne of paper, ink, and glue. It’s only after you come in close contact with one of these notable people that you realize there’s really nothing magical about them at all. They’ve just done what’s necessary.

Become today's NEXT business genius — ORDER The Personal MBA Masterclass
and receive an INSTANT SAVINGS of 80% OFF the regular program price!

Eliezer Yudkowsky is a very deep and intelligent thinker who spends most of his time considering global catastrophic risk and future human development. I had the pleasure of meeting Eliezer while he was in New York a few months ago, and I’ve been following his posts ever since. In Einstein’s Superpowers, Eliezer meditates on the tendency of scientists (and the general public) to treat Albert Einstein as a mystical scientific superhero:

“There’s this tendency to think that Einstein, even before he was famous, already had an inherent disposition to be Einstein — a potential as rare as his fame and as magical as his deeds. So that if you claim to have the potential to do what Einstein did, it is just the same as claiming Einstein’s rank, rising far above your assigned status in the tribe...

“...The problem is not that you need an aura of destiny and the aura of destiny is missing. If you’d met Albert before he published his papers, you would have perceived no aura of destiny about him to match his future high status. He would seem like just another genius.

“This is not because the royal birthright is concealed, but because it simply is not there. It is not necessary. There is no separate magisterium for people who do important things.

“I say this, because I want to do important things with my life, and I have a genuinely important problem and an angle of attack, and I’ve been banging my head on it for years, and I’ve managed to set up a support structure for it; and I very frequently meet people who, in one way or another, say: ‘Yeah? Let’s see your aura of destiny, buddy.’

“What impressed me about Julian Barbour (a great author of The End of Time) was a quality that I don’t think anyone would have known how to fake without actually having it: Barbour seemed to have seen through Einstein — he talked about Einstein as if everything Einstein had done was perfectly understandable and mundane.

“Though even having realized this, to me it still came as a shock, when Barbour said something along the lines of, ‘Now here’s where Einstein failed to apply his own methods, and missed the key insight...‘ But the shock was fleeting, I knew the Law: No gods, no magic, and ancient heroes are milestones to tick off in your rearview mirror.”

I get a kick out of reading transcriptions of talks Warren Buffett gives every so often to business students from various universities. Invariably, someone will make the comment: “but he seems so normal!” That’s because he is; he simply figured out a way to blend his emotional fortitude with a well-developed analytical process that eliminates risk from his investment decisions, and then he waited long enough for the cash to inevitably accumulate. In all other respects, he’s a normal guy. There’s nothing magical about him.

To become successful in the field you’re interested in, you don’t need an “aura of destiny,” just an important problem (or need), the desire to improve your knowledge and skills, and the determination to solve the problem regardless of how much time and effort it takes.

What It Really Takes to Be an Entrepreneur

“When things get too complicated, it sometimes makes sense to stop and wonder: Have I asked the right question?” — Enrico Bombieri

What does it take to start your own business? Less than you think!

Achieve SIGNIFICANCE in business... and significant income and reward follow.

Learn Josh Kaufman's master plan for happiness — ORDER The Personal MBA Masterclass
and receive an INSTANT SAVINGS of 80% OFF the regular program price!

That’s it! Those are the five parts of every business. Anyone who tells you entrepreneurship is more complicated than this is either trying to impress you or sell you something you don’t need.

What’s holding you back from getting started right now?

How to Get a Valuable Education Without Mortgaging Your Life

Maybe one of the things holding you back is thinking you need a better education. Well, here are nine ways to get a valuable and practical education without mortgaging your life:

1. Recognize that most of the value of a higher education degree is in social signaling. It’s true that many employers will screen out your resume if you don’t have at least a bachelor’s degree. It’s a short-sighted policy, but it’s a reality, so the best thing to do is find ways to obtain a bachelor’s degree as quickly and inexpensively as possible. Reputable online accredited colleges like Excelsior offer test-out options, minimizing your time investment and cost.

2. Recognize that higher education is not as useful if you plan on starting your own business. If you already have skills you can use to create value for other people, no one cares where you went to school. If your goal is to become an independent entrepreneur, you’re best served by investing your time in improving your skills and actually launching the business.

3. Recognize that all education (including higher education) is fundamentally self-education. Teachers, professors, and advisers can help guide your learning, but it’s always ultimately your responsibility to learn the material. If you’re capable of succeeding after graduating from a highly selective private college, you’re capable of succeeding after graduating from a state college/community college/online program — or without graduating at all. In the words of Jeffrey Pfeffer, professor of organizational behavior at Stanford, “If you are good enough to get in, you obviously have enough talent to do well, regardless.”

4. Separate price from value. It’s common for people to associate high prices with high quality, but you can often find huge educational value by taking advantage of inexpensive resources. If you do your research, there are many ways to minimize your educational costs: borrowing books from the library, using the Internet for research, taking online courses, volunteering as an assistant or apprentice, etc.

5. Self-finance as much as possible. The less debt you take on, the better — look into ways to generate income while learning, either by working a day job or running a side business to cover living expenses. Avoid the temptation to rack up credit card debt — find creative alternative ways to fund your education.

6. Minimize your living expenses. The less money you need to live on, the more resources you can devote to educational opportunities and tools while minimizing your total debt burden. Resist the temptation to keep up with your peers when it comes to material possessions; realize that you can live a very rich life without much stuff.

7. Invest in quality tools and experiences. Trying to teach yourself on crappy tools doesn’t make sense — effective learning relies on fast and accurate feedback, and the friction created by poor tools is a very real drag on your ability to improve your skills. If you’re teaching yourself computer programming, get a good computer; if you’re learning a second language, find a way to live in a country where that language is the primary dialect. As a rule of thumb, get the best-quality tools you can afford.

8. Focus on learning economically valuable skills. In the immortal words of Zig Ziglar: “You will get all you want in life if you help enough other people get what they want.” The more you increase your ability to create real value for other people in the real world, the more you’ll prosper, regardless of what aspect of life you choose to focus on. Don’t ignore less economically useful skills like philosophy and history, but avoid operating under the assumption that knowledge in these areas will somehow translate directly into income.

9. Focus on learning directly from practitioners. Find a few people who are already successfully doing what you want to do; then find or arrange some way to learn from them directly. The lessons practitioners teach you will always be the most valuable, and you’ll learn how to make your goals a reality by following their example.

Follow these tips, and you’ll be well on your way to obtaining a practical education without giving up your personal and financial freedom. Education is great, but education with freedom is even better. 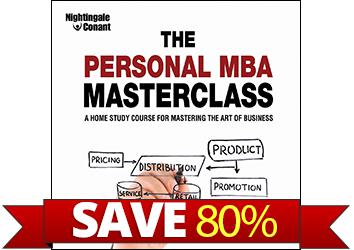 YES, I want to LEARN everything I need to know to really succeed in business in a single course!

Please send me Josh Kaufman's audio program The Personal MBA Masterclass — including 16 Audio CDs and a Workbook on CD for just $99.95, which is 80% OFF the regular program price.