Sonia Choquette, was from the age of 12, an apprentice to three spiritual masters. She is also a well-known Chicago psychic and spiritual teacher.

Having studied religion and metaphysics at the University of Denver and the Sorbonne, she is an ongoing student in Kabalistic literature. Sonia Choquette is a frequent television and radio guest, and has been featured in the Chicago Tribune and the Chicago Reader. 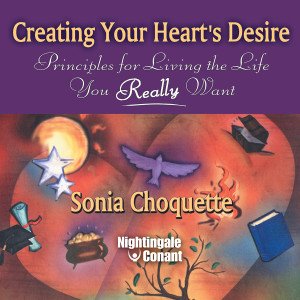 Principles for Living the Life You Really Want
What is your heart crying out for? What has been holding you back from living your dreams? There is a song deep inside you waiting to be sung. When you sing it out, you will invite a waiting partner —the Universe— to join you in completing the melody of your life’s destiny and purpose. You can fulfill your deepest wishes and hopes. You can be the designer of your own glorious future. The whole world is ready and waiting to support your desires! The positive changes in your life will truly astound you. Whether your heart’s desire lives vividly in your imagination, or is a hazy, silent longing without shape or form, these principles will lead you from where you are to where you want to be. Learn More