Business Week calls Seth Godin 'The ultimate entrepreneur for the Information Age'. American Way Magazine calls him, 'America's Greatest Marketer.' He has written fourteen books 'each one a bestseller ' which have been translated into more than thirty languages. His hit Nightingale-Conant program, Making Money on the Web has helped many people make supplemental income online.

Today, you would be hard-pressed to find a successful corporation that doesn't employ at least a few of his proven marketing insights, leadership philosophies or change strategies.As an entrepreneur, he has founded dozens of companies, most of which failed. Yoyodyne, his first internet company, was funded by Flatiron and Softbank and acquired by Yahoo! in 1998. It pioneered the use of ethical direct mail online, something Seth Godin calls Permission Marketing.

He was VP of Direct Marketing at Yahoo! for a year.His latest company, Squidoo.com, is ranked among the top 125 sites in the US (by traffic) by Quantcast. It allows anyone (even you) to build a page about any topic you're passionate about. The site raises money for charity and pays royalties to its million plus members.

Seth Godin is vice-president of permission marketing at Yahoo! He founded Yoyodyne, the first company to create promotions and direct-mail campaigns online, and helped build the company into the online permission marketing pioneer before selling it to Yahoo! In 1998. Yoyodyne clients included AT&T, Carter-Wallace, H&R Block, Sprint, Columbia Record Club and hundreds of other companies.His latest company, Squidoo.com ranked among the top 125 sites in the US (by traffic) by Quantcast. It allows people to build a page about any topic they are passionate about. The site raises money for charity and pays royalties to its million plus members.

Seth Godin graduated from Tufts University in 1982 with a degree in computer science and philosophy, and he earned his MBA in marketing from Stanford Business School. From 1983 to 1986, he worked as a brand manager at Spinnaker Software, where he led the team that developed the first generation of multimedia products, working with such forward-thinking authors as Arthur C. Clarke and Michael Crichton. He is a recipient of the 1998 Momentum Award, honoring outstanding Internet industry accomplishments. 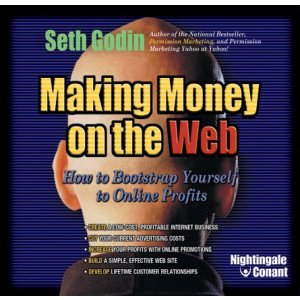 Making Money on the Web

Making Money on the Web ©2001 gives you a crash course in Bootstrapping 101, telling you everything you need to know to avoid making the mistakes and overlooking the details that wind up sabotaging many startups before they ever get off the ground. If you’ve got a company, a product, a service, or an idea that you want to market on the Internet, Making Money on the Web will show you how to do it inexpensively, do it right, and start profiting now! Learn More