Robert Kiyosaki is a motivational speaker and author specializing in wealth building, real estate and business. Robert Kiyosaki is the bestselling author of 15 books including the popular title Rich Dad, Poor Dad which has sold more than 17 million copies. Through his unique and humorous style, he is teaching millions his proven financial messages.Learn how to make money work for you with Robert Kiyosaki's praised Nightingale-Conant audio program, Rich Dad Secrets.

Think you need a sizable income to become rich? Robert proves you simply need to learn his lifelong secrets."Face your fears and doubts, and new worlds will open up to you."- Robert Kiyosaki

Born in Hawaii, Robert is a fourth-generation Japanese-American. After graduating college at the New York U.S. Merchant Marine Academy, Robert Kiyosaki joined the Marine Corps and fought in the Vietnam War as an officer and helicopter gunship pilot. Returning from the war, he possessed the skills to excel in business.

He worked for the Xerox Corporation, and in 1977 started a company that brought the first nylon and Velcro surfer wallets to market.From inventing and marketing products, he moved on to become an educator in the areas of business and finance. In 1985, Robert Kiyosaki founded an international education company teaching business and investing to tens of thousands of students.

Now Robert Kiyosaki is ready to teach YOU!

Throughout his life, he continuously employed the life lessons he was taught by his father. Yes, Robert's dad was rich. But what he gave his son was far more valuable than money. He gave him lifelong advice about how to become a self-made millionaire. Not only has Robert Kiyosaki followed his dad's advice to retire a millionaire at the age of 47, he has since shared his secrets with millions worldwide.Through his popular audio program Rich Dad Secrets, Robert Kiyosaki shares his father's bold new ideas about money to make inspiring financial changes in your life. 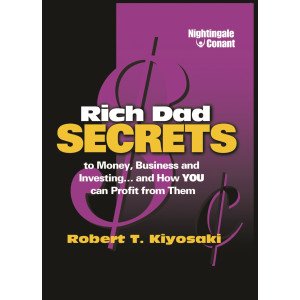 The rich follow a different set of rules for making and keeping money. In fact, the rich live in a world most of us know nothing about. Rich Dad Secrets offers the sessions about money that Robert Kiyosaki, a self-made millionaire, learned from his rich dad … a dad that gave him not money, but only his secrets to acquiring great wealth. Instead of working for money, you’ll learn how to make money work hard for you. You’ll discover why you don’t need a high income to become rich—and that all you do need is the type of financial education this program offers. Learn More