Since 1974, Nido Qubein has given more than 5,000 presentations, has received every award in professional speaking, and is represented by the best speaker bureaus. He is considered both a motivational speaker and a business speaker, with a range of topics covering everything from time management to branding.

Nido came to the United States in 1966, learned the English language, completed graduate university studies, and then went on to become living proof that this is still the land of opportunity. His life has been an amazing success story and a fitting example of what a multitalented individual can accomplish. As a marketing and management consultant, Nido brings outstanding business acumen and sales savvy to his assignments with such top companies as General Electric, AT&T, and many more. As a professional speaker, he addresses more than 200 groups worldwide annually.

As an author, he has written more than 30 books on communication, sales, and personal development.Nido invests one-third of his life in earning, one-third in learning, and one-third in serving. His bio clearly illustrates the life of a person who cares. He is chairman-emeritus of the National Speakers Association Foundation and is a former trustee on the national YMCA board of directors. Over the years, he has served on more than 30 voluntary boards, including the High Point Community Foundation and the National Board of American Humanics. He is the recipient of the Cavett Robert Award for speaking, has been inducted into the International Speakers Hall of Fame, and has served as board chairman of the National Speakers Association. 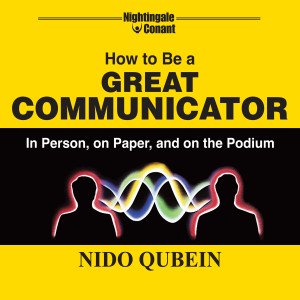 How To Be a Great Communicator