Howard Stephan Berg is widely acclaimed as the World's Fastest Reader. His accomplishments have been recognized in The Guinness Book of World Records, recorded in major newspapers across America, and demonstrated on more than 600 radio and television programs nationwide.

Realizing while a college student that he had never been taught how to learn, Howard Berg pioneered a revolutionary reading system that incorporates powerful psychological methods as well as traditional mechanical techniques. The result is increased speed with dramatically enhanced comprehension and retention.These methods have enabled Howard Berg to read over 25,000 words per minute and write more than 100 words per minute. He is also known for advanced problem-solving strategies.

Trained in psychology, Mr. Berg served for 10 years as an officer in an electrical construction corporation and for 10 years as an educator. For the past 18 years, he has been a highly acclaimed and greatly demanded speaker at schools, corporations, and government facilities, motivating and teaching individuals how to reach their true potentials. 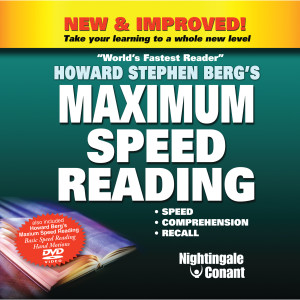 Maximum Speed Reading will help you to read and comprehend massive amounts of written information - in any subject area - with unbelievable speed and remarkable retention and recall. You'll be able to absorb, retain, and recall huge amounts of information on any subject, in any written format. You'll amaze employers, clients, and friends with your remarkable and hugely valuable skill. And you'll possess the ultimate secret for succeeding in today's information-packed world. Learn More