Dr. Newberg has been particularly involved in the study of mystical and religious experiences as well as the more general mind/body relationship in both the clinical and research aspects of his career. He has published numerous articles and chapters on brain function, brain imaging, and the study of religious and mystical experiences. He is also the author of The Mystical Mind: Probing the Biology of Belief (Fortress Press), which received the 2000 award for Outstanding Books in Theology and the Natural Sciences presented by the Center for Theology and the Natural Sciences. He also was the Teacher of the Year in the Biological Basis of Behavior Program at the University of Pennsylvania in 2010.

He has presented his work at scientific and religious meetings throughout the world and has appeared on Good Morning America, Nightline, CNN, and ABC World News Tonight as well as in a number of articles in the media, including Newsweek, Time, The New York Times, Los Angeles Times, and Reader's Digest. 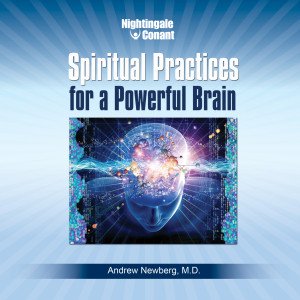 Spiritual Practices for a Powerful Brain

Drawing on what he discovered about the "God-brain connection" during his years of research, renowned neuroscientist Dr. Andrew Newberg has developed a collection of nine targeted spiritual practices designed to help anyone, of any background or belief system, enrich their mind and body as well as their soul. In the six sessions of this groundbreaking program, Dr. Newberg details these practices and offers guidelines for their implementation, along with the fascinating science and research behind them. Learn More